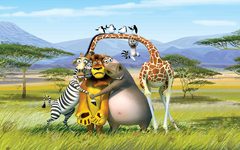 Madagascar is a 3D animated movie that stars a group of animals who have escaped from a zoo and are trying to get back to it. The movie was such a big hit that they made a sequel, Madagascar 2, and video games to go along with the series of films. This video game for PC is based on Madagascar 2, and on this occasion, our animal friends will embark on a journey, not to New York, but to the place where most of them originally came from: Africa.

The graphics in the Madagascar 2 video game are very good, since they are exactly the same as in the movies. You will meet up once again with Alex the lion, Melman the giraffe, Gloria the hippopotamus, and of course, the penguins. The downside is that the voices of the characters in the video game aren’t the same as the ones in the movie. Another negative aspect that we should point out is that the game’s camera isn’t used well, and it will often have a delayed response when you tell it to change planes.

But overall, if you enjoyed the movies, you will at least want to try this demo version of the Madagascar 2 video game.